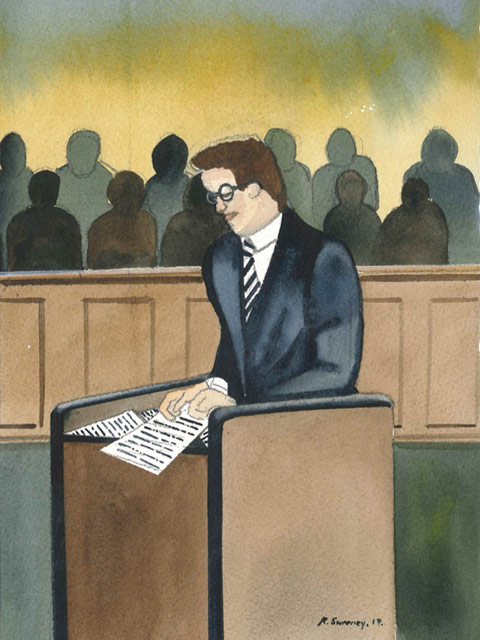 Second place in the intermediate group

“Would the defendant please take to the stand.”
Quickly putting his hair comb back in his pocket, Robert entered the court-room at a nervously slow pace. The flashes from a battery of photographs illuminated the left side of his face, revealing drops of sweat trickling down his forehead as he walked down the main aisle of the hall. With a steely-eyed jury glaring at him and judging his every movement, this was clearly not a time for any hiccups. The lawyer’s reputation was on the line here and, by the time he walked through the doors behind him again in an hour, the fate of his future career would have been set in stone.
After what seemed like a marathon, Robert finally reached the podium to make his case to the audience. He had spent the past week meticulously crafting and perfecting today’s speech in front of the jury with his client, a man who looked guilty despite Robert’s every attempt to conceal his suspicions. He thought to himself in the evenings leading up to this day if what he was doing was really right; was his sense of morality really worth losing his job, let alone losing the case itself? He hid these fears from his family, friends and colleagues like a safely-guarded secret to ensure his inner weakness was never found out.
In a weak and dazed-out fashion, Robert gathered his documents and cleared his throat to speak.
“I can’t do this,” he quietly mumbled to himself.
“Is there something wrong, Mr. Harkins?” the judge inquired.
Robert looked back at his sheets of paper, desperately trying to pull himself together in a final act of inner concealment. However, by now his true thoughts had taken hold of him. To the jury’s astonishment, Robert walked out of the room.

There was a small crack in the door - quite hard to notice, but someone had been out there, or in, a...

Winston is a 26-year-old Gorilla with long black hair and a blue lab coat, he is a great scient...