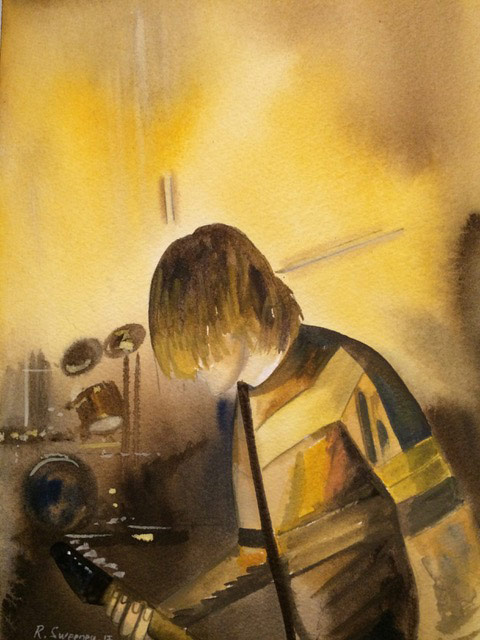 Third place in the secondary group

Ripping his in-ear monitors out, Dave struggled to hear himself over the roaring crowd. He was a month out of rehab and still irritable. As he stared down at his guitar, frantically trying to hit the silent notes, a light shone over the crowd, reminding him how much he hated his fame. The lead signer darted a look of “What the hell man?!” to which he returned an equal look of anger, resentment and sadness.

Covering his face with his hair, he tried to hide the image of the crowds and retreat into his own world. This, however, could not stave off the burning pain of his popularity. After the ridiculous success and rise to the top, his tortured soul just wanted out. All the autographs, the interviews, the fans, the stalkers, the attention. It was just not worth it.

His erratic and frankly out-of-tune playing was starting to capture the audience's attention, his hidden ‘prima donna’ coming through.

When his string snapped, that was it. Dave hurled his 1965 Fender Telecaster across the stage, hitting his huge Marshall stack and narrowly missing the drummer. The impact caused an ear-piercing equal of feedback to echo and reverb around the festival.

The lead singer glared at him with pure horror and began to run at him. Dave quickly dodged and toppled over the stacks, causing thousands of dollars worth of damage in a matter of seconds.

Producers, techs and assorted crew came running on to restrain him but he managed to wrestle himself free. Running as fast as his unexercised body would carry him, he ran through security, past the beer tents and towards the exit. He had to jump the festival wall and, escaping with only mild cuts, disappeared back into London’s drug scene.